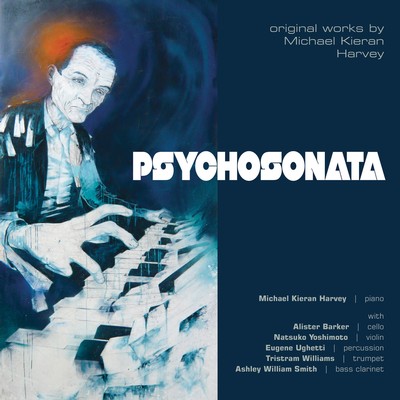 The longest work is "Psychosonata" about which Michael Kieran Harvey wrote:

"I was always fascinated with the work of Francis Bacon, and my musical choices and interpretations gravitated to works that had a similar primeval anarchy, but within a highly rigorous discipline. The cover art of Brett Easton Ellis’s American Psycho I found very compelling as an allegory of the respectably dressed Ayn Rand corporate monster. In this sonata I had also in mind something of the dark thickly-layered use of colour of Frank Auerbach, especially his paintings of heads, where he tries to depict psychological intensity with a veritable catatonia of lines and colour. The structure, the head, is the sonata form - in three distinct sections - but the storm engulfing it is a restless sequence of numbers, occasionally shot through with scarifying lightning and abrupt silences.
There is no narrative. The entire work is constructed on the bijective numeration system, that is, all nine Hindu-Arabic numerals without the concept of zero. There is an obsessive exploration of these numerals which constrains and controls the musical terrain in an artificial and additive fashion - almost robotic - rather like what I understand to be the unsympathetic thought processes of the psychopath, or the seemingly disordered thought of the psychotic."

“The indefatigable soloist, with merely a gulp of water to sustain him, then embarked on his own Psychosonata (or Piano Sonata No 2) – one of his better works he told us in typically self-effacing manner. Originally commissioned by the Society of Australian and New Zealand Psychiatrists, the work is dedicated to the composer’s cat, coincidentally also called Psycho! A 30-minute work in three movements, it requires a prodigious skill to cope with its angular demands and widely ranging dynamic neuroses. Fortunately we were in safe hands and Kieran Harvey proceeded to take us for a compelling spin. Comparisons are odious but it had the kind of appeal of an extended Ligeti étude with frequent schizoid episodes. The composer literally sweated over his interpretation in a dazzling display of bravura pianism. (from a review of a live performance of Psychosonata by the composer)”

“Psychosonata, Piano Sonata 2 (2012, 25 minutes), is one of Michael Kieran Harvey’s own compositions, a work, he said, that came out of 'a low ebb'. He had intended to dedicate it to a helpful psychologist, but having done so with his first Sonata, he gave this one to his cat, Psycho.

Structuring the sonata around rising and descending nine-note lines, Harvey, like Lizst, if quite humbly, sees himself as attempting to create 'a sound world different from anything before'. Like the Hanson, Psychosonata commences with a grand attack. Thundering bass lines and then upper note shocks and relentless riffing soon depart from high modernist hard-edged juxtapositions with sublime fluency, waves of notes rising and sinking into the deep against an insistent return to the unnerving counterpoint between the highest notes and the lowest. After the briefest of pauses, high notes, sweet but assertive are soon subsumed in a dense, cathartic fury, stutteringly staccato—a provisional finale to the fearful and liberating waves of ascent and descent that constitute Psychosonata. (From a review of a live performance of Psychosonata by the composer)”

“In the centre of Harvey’s own Psychosonata is a traditional sonata form with classically ‘pianistic’ lyrical flights and arpeggios representing the orderly, supposedly ‘healthy’ mind. This structure is obscured beneath a texture of fast and dissonant runs; thundering chords and stubborn, persistent lines built out of an obsessively recalculated nine-value series representing the supposedly ‘psychotic’ mind. In composing this musical palimpsest, Harvey drew inspiration from the paintings of Frank Auerbach, where extreme psychological states are represented by complex agglomerations of paint over otherwise traditional portraits. I like to think that Harvey’s resultant musical surface shows thought not so much as order and disorder, but as variations in density. As both Harvey and Elliott Gyger show at the end of their works, a dissonant chord can connote ‘orderliness’ if played slowly and softly across several octaves. (from a review of a live performance of Psychosonata by the composer)”

“Psychosonata was commissioned by the Royal Australia and New Zealand College of Psychiatrists. It's a massively conceived exploration of the darker emotions, calling for complete command of the instrument and an ability to evoke a daunting range of conflicting moods and timbre-textures. Harvey succeeded in a manner beyond reproach. Much of the work is violently percussive. (from a review of a live performance of Psychosonata by the composer)”

“Michael Kieran Harvey is one of Australia's great pianists.”

“Michael Kieran Harvey has had a stellar career as a virtuoso performer of new classical piano music. This CD release charts his more recent efforts as a “virtuoso composer”, with works from 2007 to 2013. I’ve adopted this term because, like many a virtuoso performer turned composer, Harvey’s music often stretches the boundaries of performance technique...n four works for solo instrument and piano, Harvey is joined by some excellent performers. Alister Barker is the soloist for Kursk for cello and piano (2007), Natsuko Yoshimoto for Fear for violin and piano (2007), Tristram Williams for Etude for trumpet in C (2011), and Ashley William Smith for City of Snakes for bass clarinet, piano, bass and drums (2013). The subject matter of the first two of these pieces results in a more introspective and expressive compositional approach (Kursk was the Russian submarine that sank with all hands in 2000). The latter two show Harvey’s interest in a union of jazz-rock fusion and new classical composition.

Michael Kieran Harvey seems to be having a lot of fun with his various approaches to composition which according to the cover blurb “[range] in mood from the relatively serious to cheerful pastiche”. The Psychosonata CD is an enjoyable and often dazzling listening experience.”

“Harvey as a performer is full-frontal, unapologetic, master of a rolling sonority even when the music is emotionally recessive. This exhibition of his compositions shows how complementary the acts of creation and performance are for him. While the shorter duets and concluding quartet hold your attention for the craft exerted in their combinations and alterations of sonorities, I think that the half-hour sonata gives the listener a bitingly clear picture of the remarkable musician’s intellectual and – for want of a better word – spiritual attributes. As a study of the composer/pianist at work, this Sonata No. 2 gives us unmistakeable essential Harvey.”

Psychosonata is available as as CD. It can be purchased online through Buywell Music or the Australian Music Centre which both offer secure online ordering.