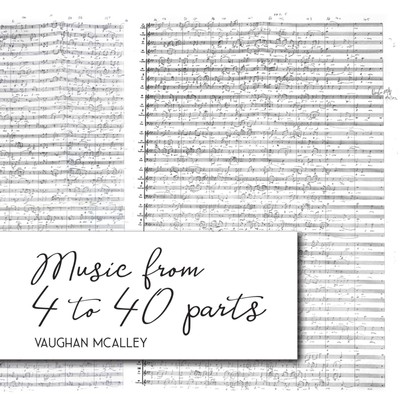 When not working as a sound-engineer at Move Records, Vaughan McAlley is a singer and composer. His music is sonorous, and he likes to explore the expressive potential of counterpoint. Music from 4 to 40 parts is a representative sample of his compositions from 2001 to 2015, performed by the Angeli Vocal ensemble, pianist Michael Kieran Harvey, chamber choir Ensemble Gombert, and the Four Seasons String Quartet. His epic motet Omnes angeli may be the first fully-polyphonic 40-part piece since Thomas Tallis wrote Spem in alium in 1570.

Ensemble Gombert is Melbourne’s outstanding chamber choir, noted for its pure intonation and historic approach to choral sound and style. Named after Nicolas Gombert (c. 1495–1560), who has been largely ignored in the twentieth century despite an exemplary reputation amongst his contemporaries, the Ensemble specialises in a cappella performance of Franco-Flemish music of the High Renaissance.

The members of Four Seasons String Quartet are internationally experienced performers. They have now been playing together since 2004 and are dedicated to bringing the wealth and beauty of string music to as wide an audience as possible. All the players have completed degrees in music and currently reside in Melbourne and perform with various orchestras including the Melbourne Symphony Orchestra and Orchestra Victoria.

“McAlley's unfailing optimism for humanity is written into the fabric of his music. Compositions ranging from wedding gifts to his 40 part masterpiece are offered to performers and audience alike with a humility that only a truly gifted composer can convey. Deeply intelligent and cerebral, his works hide a treasure trove of meaning and references for those who wish to look. But this academic attention in no way compromises the sublime beauty of his works, ever immersive and uplifting.”

“To Rosamounde, a balade uses a Chaucer text, setting for 8 voices one of the poem’s three stanzas. This work, full-bodied in character and one of the disc’s most two monumental constructs, is performed by the Ensemble Gombert conducted by John O’Donnell and it brings back memories of that group’s richly rewarding recitals held at Xavier College Chapel for many years. The stanza octet is set lucidly with both the linear meshing and the interplay sensible, utilising compositional devices with admirable facility. McAlley has added an optional extra, a coda for 18 voices to the last line, Thogh ye to me ne do no daliaunce, which is suggestive of Monteverdi, the Gabrielis, and – of course – Tallis. At this multiphonic point, the words become meaningless because the vocal complex becomes an end in itself. The effect is sumptuous, the massive piling up of individual voices most impressive to aurally bathe in. For his 40th birthday, the composer proposed to organise a performance of the Tallis 40-part anthem Spem in alium . . . All 40 lines come together to excellent effect at the first Amen. For the motet’s second part, the texture is almost continuously massive so that the evangelist’s words of praise become a sonorous melange with a few thinner oases before the explosion which is a sort of extended vocal fantasia on a concluding Amen! Tallis wrote for eight 5-part bodies; McAlley for ten 4-part groups – but detecting the difference in weight would require finer ears than mine. I can hear some insecure voices in patches of the first half of Omnes angeli but these are soon forgotten when you’re faced with the sumptuous power of the work’s later pages which give a remarkable aural realization of angelic jubilation. .. . A tribute to the musical past by recreating it.”

“This unusual disc contains fourteen works composed between 2001 and 2015 by the Melbourne-based singer and sound engineer, Vaughan McAlley. Unusual, because he has used the rules of Renaissance counterpoint as the compositional technique for every work, so the overall impression is that the music is at least six centuries old!”

Music from 4 to 40 Parts is available as as CD. It can be purchased online through Buywell Music or the Australian Music Centre which both offer secure online ordering.