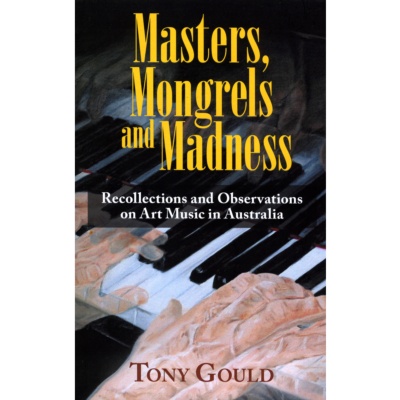 Tony Gould's writing is provocative, funny, informative, argumentative, and always passionate. His insights into music in Australia are result of three different universities and half a century as a practicing jazz and classical musician, composer, music critic, academic, writer and educator.

Gould has always had a fierce interest in Australian Culture-its land and people- and how the arts fare within it. His essay Australian Culture, Musical Identity and the Gothic Mode reminds us of many wonderful and often unique characteristics of people, and place. There is no other country on earth remotely like it.

He argues that the reputation of Australians, on the one hand being a bit 'rough around the edges and a bit Gothic, whilst on the other hand, still suffering from the cringe, obscures the extraordinary creativity and brilliance of its artists, most especially in music.

He writes vehemently about the relative lack of interest for the art music created in Australia, compared to the excessive homage paid to heritage music from elsewhere, including our museum-like, outrageously expensive, and dubiously named Opera Australia.

His essays on the inhabitants of classical music, jazz, and the strange world of academia show how a silo mentality can stifle innovation, creativity and imagination. He asks for less pomposity, more humour and humility, and time for dialogue within and across discipline.

He writes, too, about the extreme dullness of today's music criticism compared to earlier times, when it was very much alive and well, and when critics contributed to people's understanding and enjoyment of the art.

While he acknowledges the power of commercial music in society, and its many terrific qualities, he is of the (controversial) opinion that it is more a social phenomenon than a musical tone.

Under-pinning all these essays is Gould's great love for his country, the culture, the land, its music, and its artists; all the lovely, talented bastards. Ultimately, he asks a critical question: Do we live in this country or merely on it?

A bonza read; it was by “not a silly bastard at all”. Sometimes contentious and thought provoking thankfully, but also erudite and insightful. Tony Gould has long demonstrated what he “preaches" as a performer and composer, and is rightly held in very high esteem for his astonishing talents, including as an educator and writer. In MMM he convincingly discusses the expressive power and inherent value of "art music” (especially instrumental music) including improvised music, and the imbalance of funding and attention that other genres enjoy at the expense of it. He argues that we need to seek and concentrate on the practical, the deep and the beautiful in music, and that we should avoid our “cringe” to embrace contemporary and recent Australian composers and improvisers that are neglected proportionately. More than this, Gould understands, and articulates the Australian psyche, whilst dispelling the global village myth to strengthen our understanding of our time and land. He suggests where we might head from here, with the commitment of governments, administrators and other stake holders to lead us out of the current impasse.

The book proves that one can deliver a serious message and be entertaining. I found the letters to Gould from John Sangster (an artist admired by both Gould and me) very touching and profoundly humorous without being sentimental, to be an added bonus of this book.

The book contains an illuminating chapter on music critics in Australia, and their changing style (not for the best he argues) over the decades.

MMM is a must read!