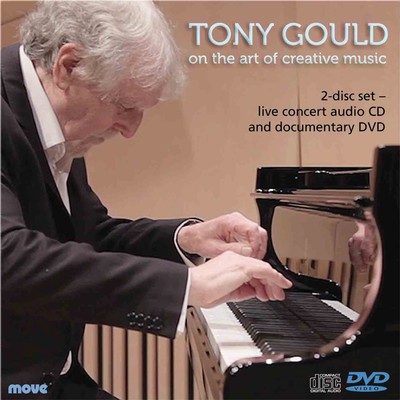 The documentary illustrates Gould’s approach to his collaborations with musicians of his own generation as well as the younger cats Gould plays with and has taught during his long standing career.

The CD presents complete performances of much of the music excerpted in the film. It was recorded at Bennetts Lane Jazz Club and the Melbourne Recital Centre Salon.

Here is a preview of the documentary (as well as three audio samples below):

The DVD documentary can also be viewed in full here: https://youtu.be/bMmO8PwGMPo

“It’s a well crafted and thought out musical documentary split into chapters interspersing Gould’s live performance footage from 2015 with various interview topics. It’s refreshing to see jazz on DVD performed by some of Melbourne’s best jazz artists and educators, and presented to motivate and inspire music fans and students to get off the couch and explore their own city, the sounds they hear and the jazz and of their surrounds. The music also enchants with it’s varying styles and pace and is a great listen.

One track Gould performs is the van Heusen / Cahn duet The Second Time Around featuring the captivating vocals of Melbourne jazz singer, Michelle Nicole. Nicole re-imagines this song interpretation in her own sensitive way. Gould says: 'All music making is all creative … they (the musicians) are bringing new life to the music on the page'.

Various topics are explored including creativity, improvisation, music making, attitude and intergenerational experience. The latter is something that Gould relishes, saying many of the musicians he works with 'keep me young', while other students inspire keep him to playing and composing. Imogen Manins is one such featured talented cellist Gould admires. She plays with him on the Schindler’s List track.

Gould feels that jazz musicians are starting to spread their own wings, and move into improvisation via exploring films scores such as Schindlers’ List, and he advises future music students about composition and improvisation. 'Forget about genres and idioms, choose the music you love as much as you think other people will. It (Schindler’s List) suits the cello and is a lovely cross over between jazz, and classical.' Van Leeuwen also explores jazz further with Gould as a 'minority art form' and craft, to which he has some wonderful insights. Can jazz musicians can be very self absorbed when they play – do they play for themselves or their audience?

'The jazz players play for themselves, which sounds terribly selfish … Selfishness it’s not...I think that’s the embracing of the people you listen to (if you’re sitting in audience listening to the musician) … come on the journey, it’s the journey, we don’t know what’s going to happen.'

'There’s a wonderful camaraderie, Australian musicians base their playings on “I trust you” we’ll see how it goes … you don’t get told what to do.' Gould also says for many jazz artists who improvise, becoming absorbed 'in the moment' varies greatly from that of the familiar classical music world.

Promotion of improvisational jazz can be tricky. 'It’s a hard music to grasp if you don’t saturate yourself in it,' he says. 'It’s incredibly exciting, but also can be disconcerting for people to come and listen to and they haven’t got anything really to hang onto unless they know the language.'

He speaks highly of those dedicated to their craft and music. Another featured artist on the DVD and CD is 'master' classical Indian tabla musician Sam Evans. Gould says he spent 10 years over in Calcutta, playing Indian music and exploring the genre and sound. He’s one to watch in the future. 'Sam brings something special to improvised music … he’s creating and composing music where the Tabla can be integrated into various music compositions.'

As for Gould’s next jazz music / improvisational project, he gives very little away. One of the pieces on the release is called The First Day of Spring draws on a classical music line with a European melody. 'The beat is obscured, which I love, that’s the essence to my current playing at the moment,' he says.

Thanks to this great DVD release, you can enjoy the featured tracks in full on the accompanying CD. This is definitely one you’ll want to listen to repeatedly.”

Tony Gould on the Art of Creative Music is available for download from the iTunes Music Store.
It's available for streaming through Spotify and Apple Music.

Tony Gould on the Art of Creative Music is available as as CD. It can be purchased online through Buywell Music or the Australian Music Centre which both offer secure online ordering.