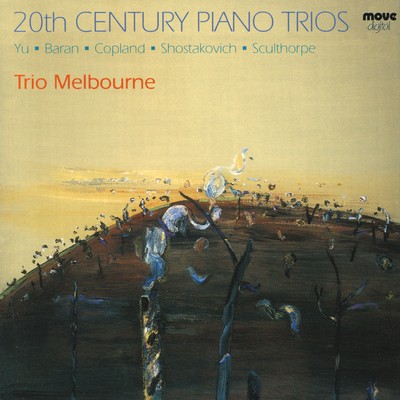 Copland's rarely performed trio 'Vitebsk', featured on this disc is based on a Jewish folk theme Copland heard in a play by Ansky.

Shostakovich's 'Piano Trio op.8 No.1' discovered only in the last ten years is relatively unknown in western piano trio repertoire.

East meets West in Ilhan Baran's 'Dönüsümler (Transformations)' A thrilling combination of folk and Western chamber music, Baran creates a series of transformations utilising Turco-Ottoman modes and a variety of rhythmic patterns found in different areas around Turkey to create what he describes as "a kind of atmospheric state of mind."

Receiving its debut recording and another brilliant addition to this collection is the evocative piece, op. 26a written specifically for Trio Melbourne by Australian composer Julian Yu. This piece, intended to pay homage to Brahms, is based on his first symphony however Yu has also been inspired by the traditional Chinese instrumental folk technique of ornamentation.

Peter Sculthorpe's 'Night Song', specifically arranged by Sculthorpe for Trio Melbourne from his song of the same name, provides a haunting conclusion to a most unique and valuable collection!

Trio Melbourne - Roger Heagney, Isin Cakmakcioglu and Rachel Atkinson each outstanding musicians in their own right, established Trio Melbourne in 1993. Since then they have performed to much critical acclaim throughout Europe and Australia.

“This is a well performed, beautifully recorded CD with an interesting range of repertoire, some of which has never before been recorded. I'd recommend it highly to chamber music enthusiasts.”

— Harrien Cunningham, State of the Arts

Trio for Violin, Cello and Piano, Op. 26a Julian Yu

20th Century Piano Trios is available as as CD. It can be purchased online through Buywell Music or the Australian Music Centre which both offer secure online ordering.