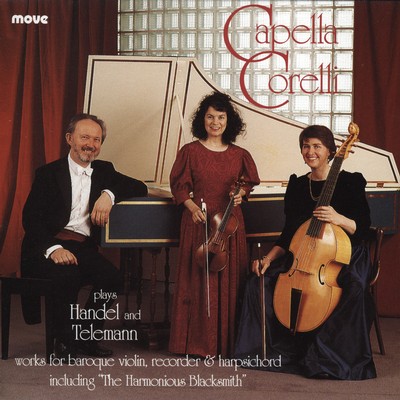 Four of the five sonatas recorded here belong to the da chiesacategory, that is to say, the movements are types other than dances. Telemann's Sonata in D, on the other hand, is a sonata da camera, composed of the four standard movements of the late Baroque suite. Chronologically this is the first published work amongst those recorded here, the second of a set of six sonatas printed in Frankfurt in 1715 and dedicated to Prince Johann Ernst Duke of Saxony.

“The musicians play the pieces totally in keeping with the spirit of the music; it's again a CD I've played time and time again.”

“It is commendable that Move should capture some of the country's leading earlier music players on disc ... Capella Corelli displays a great dal of technical security and rhythmic tautness ...”

Sonata in A major, for Violin and Basso Continuo, HWV 361 George Frideric Handel

Capella Corelli Plays Handel and Telemann is available as as CD. It can be purchased online through Buywell Music or the Australian Music Centre which both offer secure online ordering.