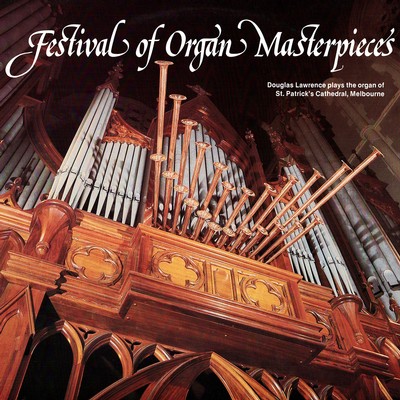 A feast of riches! This disc brings together many of the best loved and frequently played works from the organ repertoire performed on St. Patrick's Cathedral Organ, Melbourne.

Features Purcell's 'Abdelazar - The Moor's Revenge', Handel's 'Largo and March 'from 'Judas Maccabeus', Widor's 'Toccata' from 'Symphony No. 5', Bach's 'Jesu Joy', 'Toccata' and 'Fugue in D minor', Couperin's 'Chaconne 'and Mendelssohn's 'Sonata No. 6 Finale'. The booklet features a full specification and historical information about the organ, as well as comprehensive musical notes.

“…It is simply a collection of short and very popular pieces, including several that were written originally for other instruments, played splendidly as organ solos by Douglas Lawrence, and very well recorded… The recording quality is excellent and has an ambience that is absolutely characteristic of the cathedral.”

“all popular works and is full of favourites.”

Festival of Organ Masterpieces is available as as CD. It can be purchased online through Buywell Music or the Australian Music Centre which both offer secure online ordering.