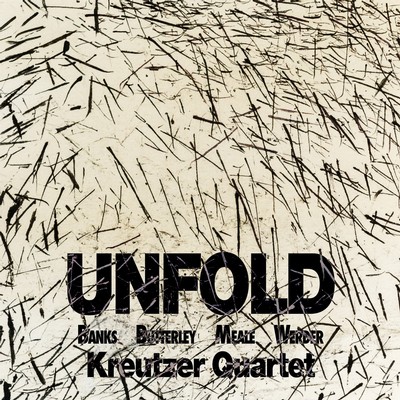 They are the dedicatees of numerous works, and over many years have forged creative partnerships with composers including Sir Michael Tippett, David Matthews, Michael Finnissy, Judith Weir and Hafliði Hallgrímsson.

In this recording, they present works by eminent Australian Composers, Don Banks, Nigel Butterley, Richard Meale (No. 1) and Felix Werder (No. 8).

There is a bonus track (Sequence for solo cello) available by download. You can purchase the 13 minute track from iTunes: enter "unfold sequence" in the search box.

All seven tracks are available in high definition from these sites:

Banks’ Sequence for solo cello was commissioned by the 66 Group in Cardiff, and it was first performed by George Isaac in 1967. The form of the piece is straightforward. An opening lento establishes the piece’s principle motifs. The allegro that soon follows develops these ideas. This development includes sections that are ‘ad lib’ in timing, and which begin a counterpoint between dramatic, virtuosic passagework, and slow plainchant. The second section begins by extending the plainchant idea with a series of slow, evenly timed pitches. Between each ‘Canto,’ as Banks terms them, are sections that explore a specific technique: sul ponticello; pizzicato; sul tasto; col legno. Although these sections focus on one technique, that technique is not used exclusively; for example, the movement to and from pizzicato is as important as pizzicato itself. Similarly, the opening of the piece moves around the four open strings of the instrument, but it is not limited by these four pitches. A short coda brings all the earlier ideas together.

“The versatile Kreutzer Quartet takes a whirl in the time machine and journeys to Australia for four string quartets composed between 1964 and ‘75. Meale and Werder receive first performances. These Banks and Butterley quartets haven’t been committed to disc since the 1980s. What looks to be a historical outing actually sounds as fresh and compelling as anything written last week. Michael Hooper’s fine notes explain the endeavor.

Banks’ 20-minute single-movement quartet reflects studies with Dallapiccola, Babbitt and Gerhard, a strongly expressive atonal sensibility that his Australian colleagues never fully appreciated. Butterley would write four quartets. These two movements take inspiration from a poem by Henry Vaughan (1621-1695), The Revival, whose first word provides the disc’s title. The music is precisely notated, but can be arrhythmic and intentionally lack vertical alignment.

Meale and Werder’s quartets are played from full score (the cover art is Meale’s blotting paper). Meale’s No. 1 is in two parts. For the second part, the players scatter to new positions turning their backs to the audience, projecting icy indifference. The contrast in atmosphere is enormous. Werder intentionally doubles the final letter in “quartett,” yet the work doesn’t feel Germanic. Tempo markings are literally cut out of Walton’s Cello Concerto and pasted here. Born in Berlin, eventually settling in Australia, Werder remained an outsider.”

Unfold is available as as CD. It can be purchased online through Buywell Music or the Australian Music Centre which both offer secure online ordering.