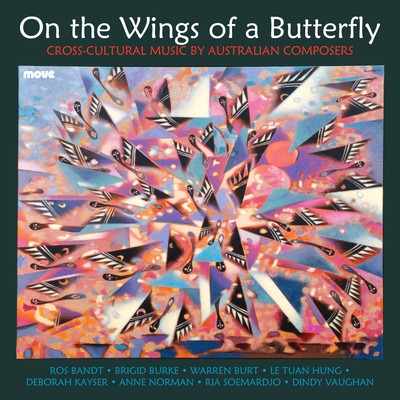 Instruments, colours of tones, concepts and voices from many cultures are explored and combined to generate new musical entities that transcend the artificial boundaries between East and West.

In this collection, listeners will experience the exquisite vocals of Ria Soemardjo and Deborah Kayser in combination with the meditative sounds of the shakuhachi, the delicate voice of the Vietnamese zither dan tranh interlocking with the harmonics of the original Australian power pole bells, and waves of vibrant emotions in pieces for shakuhachi with harpsichord, and clarinet with Indian drums.

Brigid Burke is a composer, clarinet soloist, visual artist, and educator. She has performed extensively in solo and chamber recitals, both nationally and internationally. She has also presented her musical ideas and concepts as a performer, composer and creator through workshops, lectures and master classes.

Wendy Couch has presented solo recitals and concertos in Australia and the US. As a freelance percussionist she has performed frequently with the Melbourne Symphony, Australian Pops Orchestra, Canto Coro and the Australian Boys Choir.

John Britton is the artistic director of quiddity theatre, scriptwriter and performer. He has been writing and performing original performance works since completing his MA in 1988.

Ria Soemardjo’s distinctive vocal style is shaped by her love of traditional Asian music as well as an inventive and eclectic approach to improvisation. Curious about her father’s love for the haunting songs of his traditional Javanese heritage, Ria has studied this vocal style characterised by non-western tunings and highly complex vocal ornamentation.

Dindy Vaughan is a composer, environmentalist, organiser, writer and educator. Her music is frequently performed live and has been broadcast on 3MBS FM and the ABC. Happiest in the thick of artistic, intellectual but above all practical, activity, she thrives in social groups where imagination and creativity combine with plenty of grass roots growth in a hurry.

On the Wings of a Butterfly is available as as CD. It can be purchased online through Buywell Music or the Australian Music Centre which both offer secure online ordering.