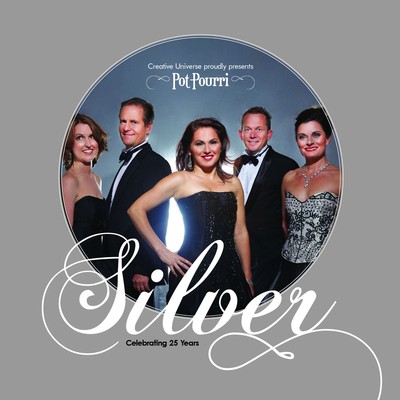 The songs tell simple and epic stories of love, loss, hope, courage, mystery and madness. From silver moons to fields of gold, pigeons to phantoms, Puccini to Sting, darkness to light ... There is music to open your heart, touch your soul and stir your senses ... a true pot-pourri which blends contemporary classics, a touch of opera, a dash of Broadway and lashings of the best music ever written.

Highlights include stunning arrangements of Cohen’s Hallelujah and Sting’s Fields of Gold, songs from Les Miserables, Phantom of the Opera, Into the Woods, Carousel, Madam Butterfly, The Pearl Fishers, Turandot and some unique gems such as Poisoning Pigeons in the Park and Stars and Moon.

Silver was launched at a major concert at Melbourne Town Hall on Sunday 27th November. Pot-Pourri will also present national and international concerts and performances at a range of special events throughout 2012.

Silver - celebrating 25 years is available as as CD. It can be purchased online through Buywell Music or the Australian Music Centre which both offer secure online ordering.