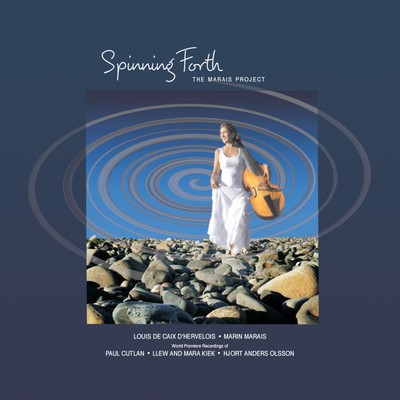 Jenny Eriksson can’t remember how many times she received this advice in the years after she gave up her career as a promising cellist and sold her two cellos to fund overseas’ studies on the viola da gamba. Discarding all logical guidance, she caught a plane to Holland and stepped “into the abyss” to create a future for herself on an instrument few music lovers in her home country had heard of and ever fewer seemed to like.

In the decades since, and illustrated in the release of her sixth CD, Spinning Forth, Eriksson has proven her well-meaning advisors wrong time and time again.

Spinning Forth, recorded with her bespoke ensemble, The Marais Project, has at its heart the key elements of Eriksson’s success: deep immersion in the core French baroque repertoire for the viola da gamba, attention to artistic detail and a willingness to embrace the new in world first recordings of a major new work by Paul Cutlan and commissioned settings of Swedish and Australian folk songs by, respectively, lutenist Tommie Andersson and long -term collaborators, Llew and Mara Kiek. However, one of the most moving tracks on the CD is a sophisticated re-imagining by Eriksson herself of a work by Marin Marais she titled Tombeau for John Dowland. She originally wrote the piece to honour the 450th anniversary of the birth of lutenist John Dowland.

Composing a tombeau, which literally means “grave” or “shrine” in French, is a uniquely gallic way of recognising the death of a friends using the language of music. “Couperin wrote tombeaus, as did Marin Marais and even Ravel” says Eriksson, “The mournful sound of the gamba is well-suited to turning our attention to death! Someone once described the viola da gamba to me as a ‘depressed cello!’” Bach of course used the viola da gamba to great effect at important moments in both the St John and St Matthew Passions and Telemann and Handel also wrote beautifully for the instrument.

Where did the CD name come from? “Spinning Forth is the title Paul Cutlan gave to the piece he wrote for me”, Eriksson relates. “He was drawing on the baroque idea of fortspinnung, where each musical phrase seems to effortlessly evolve into the notes that come after it, just spinning forth.” “In a way spinning forth is also a metaphor for my musical career. I energise myself by finding ways of moving from where I currently am artistically to somewhere new and challenging. I love blending the new and old.”

Eriksson never stands still. After the launch of Spinning Forth on December 17 at The Independent, North Sydney, her next recording will be an Australian first CD of original music for the electric viola da gamba with an all-star band of jazz musicians she has assembled. “That’s another story”, says Jenny, “And more evidence that you can make a living playing the viola da gamba in Australia!”

“Only two pieces on this enthralling album are genuinely "baroque", but the Marais Project's central instrument, Jennifer Eriksson's viola da gamba, is a machine for imbuing all it touches with that stately grace of the music of 300 years ago. Sumptuously recorded, its bass notes are as sonorous as the voice of a great baritone; the high ones diaphanous. The baroque component consists of Erkisson's arrangement of Marais' desolately sad Tombeau pour Marias le Cadet and a suite by Marais' pupil Louis de Caix d'Hervelois that defines elegance. Tommie Andersson (theorbo, guitar) has arranged a plangent tune by the Swedish folk fiddler Hjort Anders Olsson, featuring Mikaela Oberg's baroque flute. Paul Cutlan's quixotic title track is a suite for viola da gamba and harpsichord (Raymond Harvey) that improbably manages to carry echoes of Bach while also being overtly modernist in the two instruments' capricious interaction. Finally, Lew and Mara Kiek playfully fuse the English folk tune The Cheshire Rounds with a Bulgarian 11/8 rhythm as a prelude to the bush ballad The Streets of Forbes (sung by tenor Koen van Stade), proving that Eriksson's instrument can glide through space as well as time.”

“A mix of baroque, arranged baroque, contemporary, and an item uncovered in the early 20th Century, but probably of distant origin. The opening, Pieces de viole, is a relaxing work even in its more sprightly movements and it is most delightfully presented. Spinning Forth, was composed by Paul Cutlan (b 1964). It is for gamba and harpsichord and is well situated on the disc, surrounded by baroque flavours. It is a co-operation of ideas - a little each of baroque, classical, contemporary and a hint of jazz.”

“The Marais Project’s new CD Spinning Forth is a gorgeous collection of music which showcases the viola da gamba and its ensemble partners, through dedicated pieces written during its golden age in the 17th century and through its second coming in the 20th century, championed in Australia by viola da gamba player and founding artistic director of the ensemble, Jennifer Eriksson. Eriksson has created an ensemble that performs this thoughtful programme with brilliant musicianship. It is an intimate recording, rich in detail – detail that can sometimes be lost in the sound of a larger ensemble or concert hall. Spinning Forth unites music from across the centuries, continents, styles and hemispheres, illustrating the charm of early music, and demonstrating that old instruments can remain relevant as they make new music.”

Spinning Forth is available as as CD. It can be purchased online through Buywell Music or the Australian Music Centre which both offer secure online ordering.