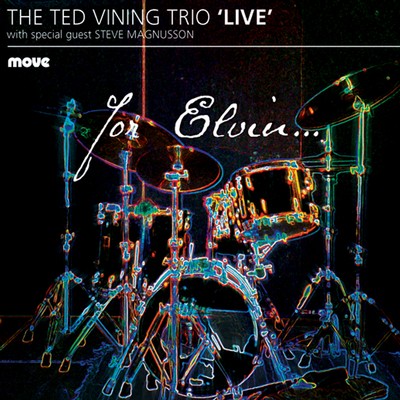 "I was there for the concert ... it was exciting, humorous, lyrical and moving", says Jim McLeod, presenter of Jazz on Ovation.

The CD was recorded in concert at Bennett's Lane in Melbourne on 28 March 2004.

"The greatest of all jazz drummers has gone. Elvin Jones passed away in May 2004 aged 76, bringing to a close a style, an energy and integrity that is irreplaceable!

We're dedicating this recording to his memory. Sure, our musics are vastly different in origin, but where the jazz is concerned, the Trio performs at all times with the same joy and enthusiasm as was always evident with the great man. There is no other way to play this music!

There's a more personal connection as well. We were fortunate enough to see, hear and hang out with Elvin during a Scandinavian tour in 1978. Since then Bob and I have had contact, endeavoring to get his 'Jazz Machine' to Australia, and remarkably, Barry shares his birth date!

Thank you Elvin, you were the greatest, a huge inspiration and above all, a beautiful person..."

“...three powerful and idiosyncratic voices that have been together for decades. Vining's multi-limbed attack and Sedergreen's voicings can echo [Elvin] Jones' and are full of suprises. Vining has that uncanny ability to create rhythmic motion while making it sound like a never-ending solo. The cameo from Steve Magnusson on two tracks adds extra depth and colour.”

For Elvin... is available as as CD. It can be purchased online through Buywell Music or the Australian Music Centre which both offer secure online ordering.