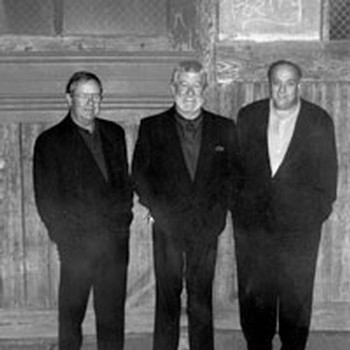 When the Ted Vining Trio's first record was released in 1977 the group was considered one of the most tightly-knit groups in Australia.

Ted, pianist Bob Sedergreen and bassist Barry Buckley first got together in August 1969, and have played around the world ever since as a high sought-after rhythm section. They create a very potent chemistry when they play together, and continue to push boundaries and stretch themselves musically.

During the seventies they worked as three quarters of the Brian Brown Quartet and as a trio have performed at all of Australia's major jazz festivals and venues now for 35 years.

The trio is now a well-oiled, fully integrated unit. Ted Vining rarely takes the limelight ... sometimes subtle, sometimes an assertive powerhouse. Barry Buckley keeps the engine purring with his solid groove-making. The inventive Bob Sedergreen joyrides over a countryside made up of mostly jazz standards, sometimes reminding you of Dudley Moore.

Says Adrian Jackson: "The three play with one mind, settling into a perfectly synchronised groove, continually throwing ideas at each other, without anyone ever being caught off guard. It is a though they have been playing together all their lives. If only more bands could communicate with each other, and their listeners, so effectively."

The Ted Vining Trio is featured on the following titles

Members of The Ted Vining Trio