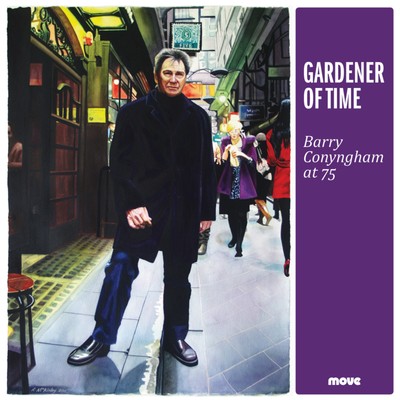 Over his long career as a composer, Barry Conyngham has published over 100 works. In his compositions, Barry has often enjoyed using titles that convey multiple meanings and suggest musical processes. Many of the titles embody the suffix ‘-ing’, suggesting something unfinished, or in the process of unfolding.

This is a bouquet from the garden of his musical imagination, and indeed most of these works are infused with a vivid and specific sense of landscape. These diverse landscapes, brought to life in sound, are also animated by a multitude of human energies, as the soloists and the ensemble move together with the vectored synergies that Barry imagined. This sound garden allows us to savour the world of colours, gestures, and resonances in Barry’s music.

The Ormond Ensemble ranges from a small chamber group to a substantial chamber orchestra. It is based at the Conservatorium of Music, University of Melbourne. On the Gardener of Time CD it is conduced by Richard Davis.

“A collection of orchestral works by Barry Conyngham ... His Japanese-infused aesthetic has stayed consistent over the decades and exerts a tantalising pull with its abstractly beautiful if sometimes uneasy sounds. The title work creates a gentle kaleidoscope of texture ... Live performances by The Ormond Ensemble and Melbourne Conservatorium String Ensemble under conductor Richard Davis are riveting.” ★★★★½

“Barry Conyngham’s fascinating, original and engaging new CD provides an hour and a half of fascinating, original and engaging music from one of Australia’s most revered composers whose music though modern in idioms is nonetheless very approachable to the average listener. The title piece is taken from an essay by Takemitsu based on a poem by Australian teenager Susan Morrison including the lines ”Hours are the leaves of life – And I am their gardener- Each hour falls down slow.” Kangaroo Island, a concerto for Double Bass invoking different aspects of one of his favourite locations – the five movements really show off the dexterity of the instrument played so well by Robert Nairn as well as highlighting the attractions of the island.”

“A wonderful collection of recent works from one of Australia’s most important composers. ... what strikes me about Barry’s music is its devotion to what he once described to me as being ‘humane’ – concerned with the outcast, be it a visionary or a convict, and with the environment, built or natural. As his music has unfolded much has remained constant, and it’s been fascinating to hear how that manifests in this collection of mainly recent pieces.”

Gardener of Time: Barry Conyngham at 75 is available for download from the iTunes Music Store.
It's available for streaming through Spotify and Apple Music.

Gardener of Time: Barry Conyngham at 75 is available as as CD. It can be purchased online through Buywell Music or the Australian Music Centre which both offer secure online ordering.