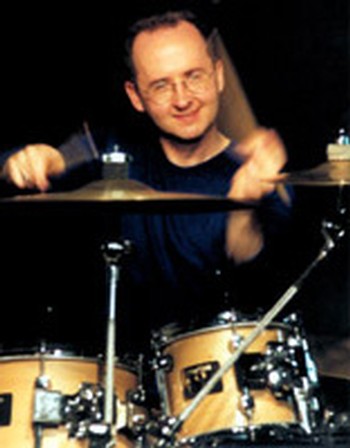 David was Head of the Drum Department at the Sydney Conservatorium from 1985 to 1993. In 2000, David returned to his home town of Melbourne; soon after, he joined James Morrison’s sextet and toured extensively with the band over three years, before being awarded a two-year Fellowship through the Australia Council. This lead to the production of the Meditations on Love CD (ABC Classics) and associated concerts. His most recent release through ABC Classics is the solo album Colours of the Drum, a double CD plus bonus DVD.

Since 2004, David Jones has entered the world of symphony orchestras and solo concerts. In 2006, Tokyo composer Toshi Watanabe composed a Drumkit Concerto especially for David. Recent highlights have included a momentous solo set at the 2008 Cape Breton Drum Festival in Canada, where he shared the stage with some of the world’s greatest drummers. In 2010 David was awarded the Melbourne Prize for Music.

Wherever David travels throughout the world, audiences are blown away with his playing, and his reputation is rapidly spreading on the world scene.

“David Jones is, in my opinion, one of the greatest, most natural, musicians on the planet. His musicianship is mesmerising and captivating - I’ve always felt he was in a class of his own.”

David Jones is featured on the following titles

Barefoot in the Sky

Barefoot in the Sky is a fusion of ancient and contemporary; rhythmic, melodic and harmonic, organic and electronic, choral and tribal and more. It traverses many moods that could embody five albums rather than just this one. Its genre title could be ‘ambient space-world jazz’.