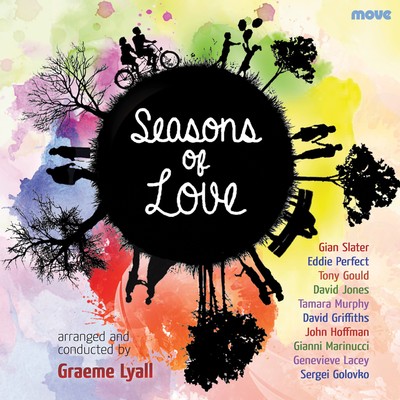 Whether the song is for voice, trumpet, clarinet, flugelhorn, French horn, sax, marimba, recorder or voice, there is something unique and inviting about every arrangement produced under the watchful eye (and pen) and soundful ear of Graeme.

In bringing together many of Australia’s finest jazz and classical musicians there is always a possibility that the two styles won’t necessarily sit as comfortable bedfellows. In this case nothing can be further from the truth with the results demonstrating how easily and seamlessly the musicians featured on this album can be transported from one style to another.

With vocalists Eddie Perfect and Gian Slater we had a rare and very special blend of vocal talents. Add to this our jazz trio, under the legendary and magical musicianship of Tony Gould, Tamara Murphy on bass and award winning, multi-faceted drummer and percussionist David Jones and the stage is set for an unforgettable experience. Then add legendary, inspiring and incredibly versatile players John Hoffman on flugelhorn, David Griffiths on clarinet, Gianni Marinucci on trumpet, Graeme Lyall on sax, and Peter Marks on French horn. There is even a guest appearance on one track from world renowned recorder virtuoso, Genevieve Lacey – listen out for this magical arrangement of an old favourite. And of course, equally importantly, the string orchestra was put together by Marco van Pagee and led by Miwako Abe.

TONY GOULD COMMENTS: Another memorable and fantastic experience – what great music-making is all about! What talent in the one studio, and all under the direction of the genius of Graeme Lyall’s arrangements and conducting. No one in the world writes better for strings, or for any other instrument for that matter. (It is no surprise that Sammy Davis Jnr. tried to entice Lyall to go with him back to the USA. But fortunately for us, he stayed!)
And what a collection of soloists that has been put together: Eddie Perfect, Gian Slater, David Griffiths, John Hoffman, Gianni Marinucci, Genevieve Lacey, and Sergei Golovko, with a rhythm section of Tamara Murphy and the remarkable David Jones, with a pianist whose name temporarily escapes me!
The Project’s creator Peter Marks and I chose the pieces and he even played the French horn on a track or two! Each piece is a classic in its own way, and without exception all are endowed with glorious melodies; pieces from Gershwin’s wonderful “Porgy and Bess”, standards including “On A Clear Day”, beautiful tunes including, “Tammy”, Sondheim’s “Send in the Clowns”, “Sunrise, Sunset” from “Fiddler on the Roof” to name but a few.
The project would not have happened had it not been for the passion and enthusiasm of Peter Marks. Thanks to him, from start to finish it was a joy for all concerned. Importantly, I think this came across in the end product. Memorable all around.

The CD was launched at the Melbourne Recital Centre on 18 July 2013.

Seasons of Love is available as as CD. It can be purchased online through Buywell Music or the Australian Music Centre which both offer secure online ordering.