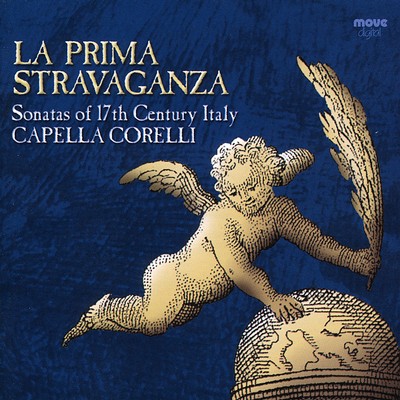 During the 17th century instrumental music was moving away from its supporting role in church and vocal music and was establishing its independence as a musical genre. This change coincided with an increase in instrumentalists' skills, many of whom were also composers. A number of their works are featured on this CD and through them one can admire both the composer's musical imagination and skill as a performer.

This recording celebrate 21 years of Capella Corelli, one of Australia's foremost Baroque chamber ensembles. The violin works of the great Italian virtuoso Arcangelo Corelli and of his Italian predecessors were the initial inspiration for the group. For its first ten years the group was based in Canberra. Working with harpsichordist and philosopher Paul Thom, they quickly established a name for performances based on the rich repertoire and newly-researched performance practices of the seventeenth and eighteenth centuries.

There have been many tours throughout Australia and New Zealand, especially with the support of Musica Viva Australia, and the group has been in demand for workshops and teaching. Since 1988, with the distinguished harpsichordist and scholar John O'Donnell, Capella Corelli has continued its touring more frequently in Europe particularly to Austria where the group's violinist Cynthia O'Brien now resides. La Prima Stravaganza was recorded just before their 1998 European tour in late July.

“The performances are lively and fresh, the sound quality excellent, and the end result very attractive.”

“... one of my favourite early music groups ... Excellent”

La Prima Stravaganza is available as as CD. It can be purchased online through Buywell Music or the Australian Music Centre which both offer secure online ordering.