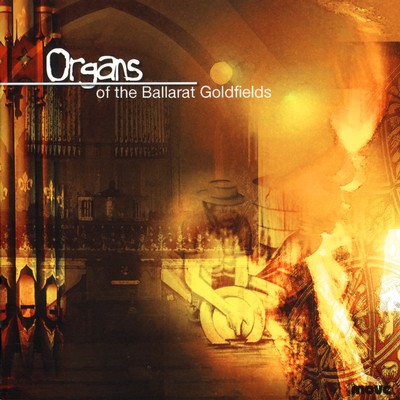 Visiting Ballarat in late 1995, Italian organist, Sergio de Pieri, discovered that within the heritage churches of the goldfields were many beautiful pipe organs, several built by George Fincham, others imported from England or with origin unknown. Some were treasured and kept in good repair, their mechanical action and their beautifully stenciled façade pipes retained. Others were unused, sometimes in disused buildings and occupied by borers or a possum or two.

Sergio de Pieri immediately created a festival, the Organs of the Ballarat Goldfields, ten days of classical music throughout the goldfields each January, having as its central theme the bringing to life of the heritage instruments but also bringing many highly regarded singers, instrumentalists and chamber groups to the region in a wide-ranging classical music program.

This CD celebrates the festival's tenth year. You will hear a great variety of music played on 15 of the Ballarat region's organs. The festival has brought music to many people who flock to the festival each year, enjoying not only the music but the exploration of heritage buildings in the beautiful countryside, the shared picnics and pasta and the discovery of beautiful, heritage instruments.

There is a fully illustrated 16 page booklet which surveys the organ builders, churches and their organs, the music, and the performers.

Rosalie Bonighton was employed as a 'house composer' by music publishers Kevin Mayhew, Ltd (UK), and had an extensive list of publications with them. She was also the organist of St. John's Anglican Church, Soldiers Hill, Ballarat.

Laura Cantagalli was born in Florence and studied music at the Venice Conservatoire including organ studies with Sergio de Pieri. She completed further studies at the Geneva Conservatoire, organ with Lionel Rogg and vocal studies. Laura is now organist at the Eglise Reformee de Courtelarty, one of the rare churches that has two organs the same size.

“...the entire project has been put together with such loving attention to detail and such devotion to an important part of Australia's musical heritage, that what emerges is a peculiar little gem ...

While the performance standards are uniformly high, the real stars, and equal villains, are the 15 Ballarat organs themselves...

If you close your eyes, you can imagine yourself back three or four generations, listening to music making the way Australia's earlier generations experienced it - on small church instruments played by musicians with evangelical fervour.”

Organs of the Ballarat Goldfields is available as as CD. It can be purchased online through Buywell Music or the Australian Music Centre which both offer secure online ordering.