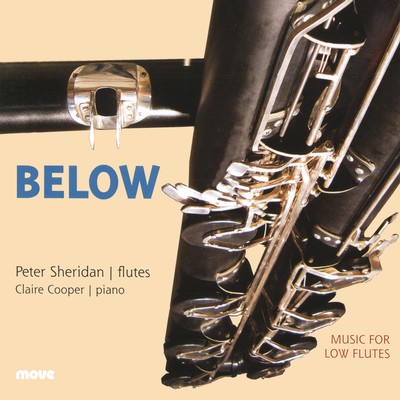 Low flutes are mostly a 20th century invention, yet the concept of extending a particular instrumental sound dates back to the Renaissance period, when recorder consorts, with bass and alto recorders were used frequently in performances. In recent times, the popularity of low flutes grew with the renewed interest in the flute choir and flute quartet. Low flutes are basically members of the extended flute family, which play below the range of the standard orchestral C flute.

“I am still basking in the beauty of Peter Sheridan's new CD, aptly titled Below. A real gem for those of us who love the lower voices of the flute family. In particular, the works of Gary Schocker and Alex Shapiro's stunning Below. Peter's beautiful and agile tone on the lower flutes is truly amazing.”

“Peter Sheridan is a musician among flutists. The result is a complex and provocative recording, all thoroughly enjoyable.”

“Peter Sheridan presents a kaleidoscope of flutes on this CD and honours every single flutemaker by playing their instruments so marvellously. In "Below" he appears to master my subcontrabassflute in a way I had never thought possible!”

“Peter Sheridan is a world class flutist, demonstrating exceptional skill and artistry on contra flutes. His creative approach to these lower instruments shines forth in his extraordinary CD "Below: Music for Low Flutes" A "must have" CD for every flutist, especially flutists who specialize in low flutes.”

“I've never heard such virtuosic playing on the low flutes!”

“Attractive performances which expand the possibilities of Low flutes, especially, the Bass and Contrabass flutes which give a very fresh inspiration and originality.”

“In this recording he [Peter Sheridan] shows the true virtuosity of low flutes...Highly Recommended.”

“... simply a feast for the ears-stunning sonorities and stunning playing throughout. Bravo!”

“Stunningly beautiful and awe inspiring - an incredibly colourful soundscape full of so many precious moments from the master of low flutes.”

“Sheridan's playing opens up a new sound world to composers and flutists alike. This recording is a thrilling and satisfying experience!”

“A Powerhouse down in the depths...”

A Small Sonata For A Large Flute Gary Schocker

Adventures Under A Leaf Gary Schocker

Below: Music For Low Flutes is available as as CD. It can be purchased online through Buywell Music or the Australian Music Centre which both offer secure online ordering.