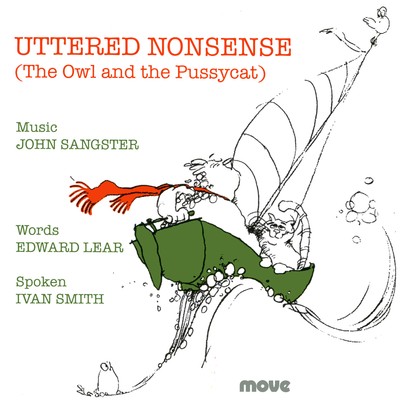 "Anyone lucky enough to have made music with John Sangster will likely refer to him as a creative genius. He certainly was that in my view and much more. His compositions, his humour and general attitude towards life were inspirational. This collection demonstrates all these qualities to be sure. It is a collectors item and one which will give great listening pleasure for a very long time." Tony Gould

Uttered nonsense (the Owl and the Pussycat), consists eight works of Mr Edward Lear, spoken with the utmost gravity by Mr Ivan Smith, and set to music of the most nonsensical nature by John Sangster.

These eight word-pieces embedded within fourteen more instrumental excursions which take their titles and their inspiration from the Nonsense Books of Edward Lear (the first published in 1846). The original double LP, was published in 1980 by Rainforest Records Australia (RF LP001). Closing the LP notes, John Sangster (1928-1995) wrote what he probably considered some sort of manifesto for Nonsense music:

"From the enjoyment of and love for [Edward Lear's] works comes the Uttered Nonsense. Nonsense-Music. Goodness knows there's not much of it about. Things being what they are nowadays. Nonsense-Music I guess should be at the same time provocative, silly, amusing, curious, thought-provoking, complex and direct, full of quotes and mis-quotes, puns, malapropism, musical spoonerisms, tight-ropes negotiated and bear-traps set up and then avoided, satisfying, adroit, nimble, fanciful, and above all entertaining and jolly."

“Sangster's only double album outside of his 'Lord of the Rings' series, and a rather more ambitious effort. In the words of the album's cover: Eight works of Mr. Edward Lear, spoken with the utmost gravity by Mr. Ivan Smith, and set to music of the most nonsensical nature by John Sangster. That's what I mean when I saw ambitious! The music has Sangster's signature sparseness, reminiscent of his 'Lord of the Rings' albums, even 'Ahead of Hair', but with a much more Modern sound. Doug Gallagher's on drums and Tony Gould plays piano, and there's a long list of more notable jazz musicians on the inside cover. I really dig the funky vibes and sitar interplay on 'The Akond of Swat'. There's also a great breezy funk vibe on 'Incidents in the Life of Uncle Arly', before the poetry interrupts the mood. That's not always the case though. A great listen throughout.”

“As the master jester Nabokov wrote, everything good in life – love, nature, the arts – is play. John Sangster was an innocent in that best sense, and this music is play in the best sense. Sangster’s instrument of choice is the vibraphone, an instrument based on the xylophone of which the toy version is often the first instrument of childhood. But on these documents, Sangster’s composition, arrangement and conducting skills assume prominence. I’m a nostalgic fan of Lear as my best man read his The Owl and The Pussycat at my wedding. There is a considerable range of sounds in the programme of 22 compositions, including trios, quartets, overdubbing, and natural sounds. The music called “jazz” had been seriously marginalised and it is testament to Sangster’s musical vision that he never succumbed to the zeitgeist and focussed on his own highly individual and playful and entertaining art.”

“On these CDs both he and John Sangster and his players seem to have made connections for everybody. Uttered Nonsense is a collector's item.”

Uttered Nonsense (The Owl and the Pussycat) is available as as CD. It can be purchased online through Buywell Music or the Australian Music Centre which both offer secure online ordering.