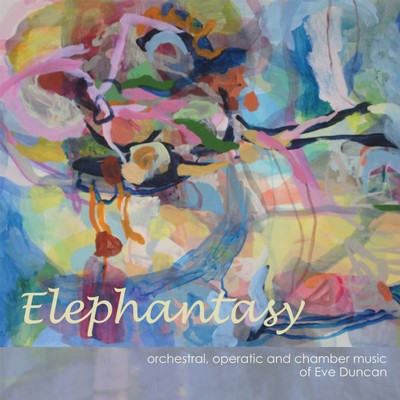 This new collection from Eve Duncan presents her creative process over the years 2012 to 2018. There are multiple themes and collaborations here. Most of the music is about the joy and uplifting feeling that one experiences in fantasy - hence the title, Elephantasy. Eve has loved elephants her whole life and so joined her love of music/fantasy to create the title.

The Aspern Papers was a highlight of Eve's composing career with the opportunity to collaborate with one of Australia's most iconic writers, David Malouf. It is an opera based on a short story by Henry James, with Malouf's compelling and funny lyrics inspiring Eve's compositions.

Another of Eve's interests - combining coastal architecture into her music, can be found in the piano concerto Sydney Opera House. Considered to be one of the Seven Wonders of the World, the building of the Sydney Opera House was a huge event in Australia. In this architecturally-inspired work the piano performance of Michael Kieran Harvey takes on the voice of architect Jørn Utzon, as he plays alongside a chamber orchestra.

If variety and creativity are the spice of life - this is a delicious and highly satisfying recipe!

A group of musicians assembled to perform some of the tracks on composer Eve Duncan's "Elephantasy" CD. The players were conduced by Timothy Philips.

Timothy Phillips' teachers have included percussionists John Seal, Daryl Pratt and Isao Nakamura. He has performed with numerous orchestras and ensembles both in Europe and Australia including Ensemble Modern, the Frankfurt Radio Symphony Orchestra, the Australian Art Orchestra and Libra.

Tristram Williams maintains a busy international career as a leading young soloist, ensemble musician, improvisor and educator. Williams is particularly interested in new music, and has worked with many international and Australian composers, and has had many solo works composed especially for his unique talent.

Sirius Chamber Ensemble was formed in 2011 by Ian Sykes and Dr Alison Evans and is committed to premiering new works by Australian and international composers alongside classics from the repertoire in a friendly, accessible atmosphere.

“Even-tempered retrospective. In essence, this all represents a mini-retrospective of Duncan’s activity, bridging from 2012 (the Sydney Opera House concerto) to 2018 (Aer Turas and From a Star Afar). This CD is commended to those who have sympathy with Australian composition, especially of a type that follows an approachable middle ground and avoids attention-seeking novelty for its own sake. The two parts of Duncan’s piano concerto (have) Michael Kieran Harvey investing his brilliance in its solo part. Harvey appears on the following duo track, with Tristram Williams playing trumpet. This work moves with an energy that relaxes only in its final bars, both instruments handling a limited number of motives to happy effect. As far as the work’s language goes, Duncan walks a kind of middle road between complexity and sophisticated simplicity where even the dissonances aim to strike few sparks and suggestions of tonal underpinning loom large. As anticipated, Harvey performs the solo From a Star Afar with admirable sympathy, the underlying vision here being of observing Earth from outside itself. No tricks as the piece winds its way along with a kind of calm determination – but it’s over very quickly, coming in at under 90 seconds. As far as I can detect, the six extracts from The Aspern Papers is the only time even parts of the opera have been performed in this country. The Australian Music Centre site suggests that a performance took place in Manila a year previously, but that occasion in all probability featured only the overture, Track 1 on this CD. Will we be likely to hear a complete performance at any time soon? Probably not, particularly considering the parlous state of contemporary Australian music in 2021, let alone the fits and starts that beset the larger, tradition-minded companies. A pity, because Duncan’s work has its advantages: its language easily assimilable, its characterization lucid, demands on vocalists and instrumentalists (a chamber group here, conducted by Phillips) falling well inside the competence of professionals.”

“Orchestral scores, some with piano soloist and others with voice, allow Duncan to paint with broad colourful strokes whilst in the smaller scale works we hear a composer who seems to enjoy polishing small motifs and making them sparkle. Two little gems of composition are given delightfully charming performances by pianist MKH and Tristram Williams. The solo piano work From a Star Afar is less than 2 minutes but it’s brevity is just spot on.”

Elephantasy: orchestral and operatic music of Eve Duncan is available for download from the iTunes Music Store.
It's available for streaming through Spotify and Apple Music.

Elephantasy: orchestral and operatic music of Eve Duncan is available as as CD. It can be purchased online through Buywell Music or the Australian Music Centre which both offer secure online ordering.