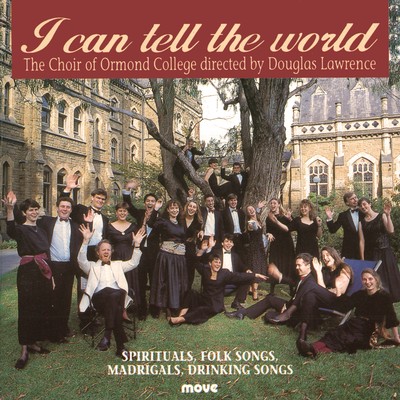 Yet another disc from one of Australia's best choirs - the Choir of Ormond College!

During their European tour in the early 1990s, the critics in Europe were quite ecstactic about the repertoire found on this recording.

Madrigals and drinking songs are part of the repertoire of this choir which enjoys an enviable international reputation. Features saucy rounds by Purcell, English folk songs including Vaughan Williams' 'Greensleeves ' and Percy Grainger's arrangements of 'Brigg Fair' and 'Irish tune from County Derry', beautiful interpretations of seven spirituals including 'I Can Tell the World', 'Wade in the Water' 'Ac–cent–tchu–ate the Positive' and 'Now is the Month of Maying'.

“Let me make my prejudices clear. I don't like this type of music. Unaccompanied Renaissance choral singing is really not my cup of tea. Here is austerity and purity to the nth degree. But even a Philistine like me can recognise that Douglas Lawrence and the Choir of Ormond College can sing this sort of music better than almost anybody else in the world. The Choir of Ormond College, under the direction of Douglas Lawrence, is a world-class a sumptuous mixture of songs, spirituals, rounds, madrigals and folksongs. The record has all the feeling of being an adventure – a wide variety of types of music, an energetic bounce of delivery, and more than a few rude lyrics.”

“'I can tell the World' and 'Deep River' proved the worthy voices, the homogeneity and the captivating intonation of this vocal ensemble.”

“sung with infectious joy and rhythm”

I Can Tell The World is available as as CD. It can be purchased online through Buywell Music or the Australian Music Centre which both offer secure online ordering.