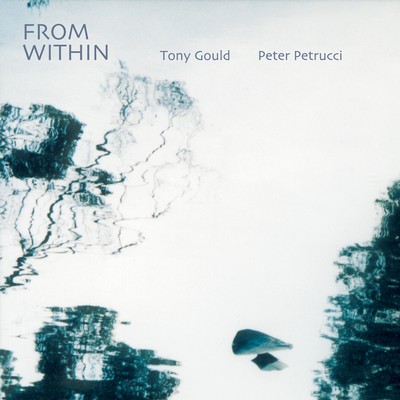 Of this album, Tony Gould writes:

"We are proud of this music. We think it is best described as honest music making, and would also like to think it is artistic, therefore inviting the listener back for years to come."

Peter and Tony were both inspired by the direction of this new recording and we hope you will be too. Not to be missed!

“Plenty of piano-guitar duets appeal to your heart. This local pair makes it skip a beat and race ahead, with Gould's mix of elegance and emotional honesty combined with Petrucci's blend of lyricism and virtuosity. Improvisation underpinned by a respect for emotion and mood ...” ★★★★

“this sublime collaboration ... The result: music that at times has its own lyric charm or smoulders with fervour ... a recording of rare quality that should appeal to jazz fans of all persuasions ... Three years since their superb River Story, they have produced an even better album ... This is music from the heart.” ★★★★

“tranquil and idyllic ... gentle colours ... a geat deal of serene, reflective moments that focus on space and melody ... this spontaneous exchange of ideas suits them well ...”

“It embodies the mastery of technique, musicianship and highly individualistic imagination these two masters bring to their craft in a concert to be enjoyed often and treasured indefinitely.”

“Often it has the bearing and aura of restrained chamber music, with a warmth at the core as well as a reverential but probing outlook. On the whole it is gentle, absorbing, patient music. But there is variety ... The players balance each other perfectly, making this a deadly collaboration. 8.5/10”

“the pair have an uncanny empathy for each other ... This is intimate chamber jazz at its best.”

“The CD offers a great variety of works ... a beautiful meeting of piano and guitar.”

“The menu is a mix of quite new music and lyrical but fresh, improvisatory versions of 'old' pieces ... a really fine duo”

“With From Within comes every nuance of feeling that you could imagine ... The piano of Tony Gould is thoughtful and inspiring and Peter Petrucci's guitar is masterly, the two taking this reviewer on a journey she will want to make again and again.”

“Tony Gould and Peter Petrucci effortlessly deal with the challenges ...The mutual sympathy of these two fine musicians is obvious throughout ... leaves one wishing for more!”

“an even stronger and more satisfying set ... brilliant counterpoint ... Gould's essentially romantic approach finds a perfect complement in Petrucci, whose playing is equally fluent on electric or acoustic guitar.”

“every bit as good as River Story ... highly recommended.”

“There are too many highlights in the set to go through. Suffice to say it is a remarkable collaboration between two fine musicians.”

From Within Peter Petrucci Tony Gould

From Within is available as as CD. It can be purchased online through Buywell Music or the Australian Music Centre which both offer secure online ordering.