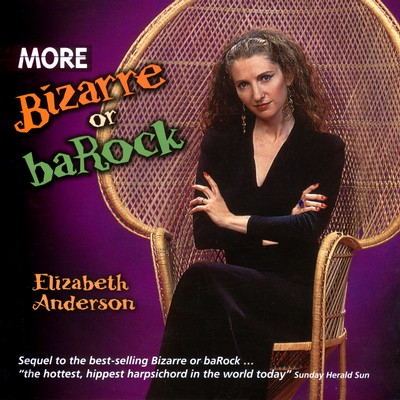 Barock is a German word, which originally meant 'bizarre'. The word 'rock', incidentally, was used early in the 20th century as a euphemism for sexual congress and later became a generic musical term. It was not until early in the 20th century that the word Barock was used in Germany to describe the music of Bach's time. When Sir Charles Burney first used it in his German Tour diary (1733), he explained that it meant 'course and uncouth', much as writers then used the word 'Gothic'. In architecture, the word Barock was applied from about 1867 to the highly-decorated style of the 17th and 18th centuries in Austria and Germany.

Therefore, to apply the term Baroque (French/English spelling) with all its shades of meaning is to extend the boundaries of Baroque music far beyond the dates that have traditionally been set for it.

“Elizabeth Anderson's latest compact disc may well prove startling. Certainly, it is one of the most delightfully entertaining recitals on the instrument I've heard in a long time.”

“... a reminder that classical music doesn't need to be serious all the time ... Elizabeth Anderson marries her taste to a good sense of humour and delivers a fascinating program that ranges from Bach to boogie.”

“Anderson is a dynamic and imaginative player. I enjoy her energetic rendition of Mozart’s Rondo alla Turca. She also has a sensitive, introverted side; and several of the pieces she has programmed for this recording, like Herbert Howells’s poignant ‘Lambert’s Fireside’, show her in that light. The harpsichord is supported in some pieces by a jazz rhythm section of bass, drums, and vibes, in various combinations. The Australian didjeridu makes an appearance in Ron Nagorcka’s ‘This Beauteous Wicked Place’.”

More Bizarre or baRock is available as as CD. It can be purchased online through Buywell Music or the Australian Music Centre which both offer secure online ordering.