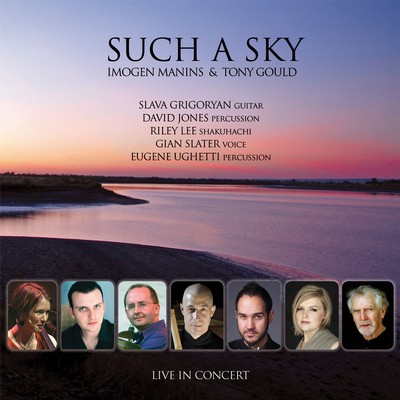 Such A Sky, by the Manins & Gould partnership, is an album for dreaming; for lying back and losing oneself in the promise of infinity. Music takes off where words end; the ringing warmth of the cello, along with the lyrical wistfulness of piano and extraordinary guest musicians, lead you beyond the gateway of this world to a place of never ending possibility.

In keeping with the Manins&Gould tradition, the pair takes snatches of melodic material, improvising and weaving them through the soundscape of the CD; echoing them back in different guises. The new album also sees the return of a couple of old favourites; Paul McCandless’ Queen of Sydney and Einaudi’s Canzone Popolare (1500ca) as well as an evocative rendition of the WH Auden poem, Funeral Blues.

All tracks were recorded live at the Melbourne Recital Centre’s Salon with guest percussionists Eugene Ughetti and David Jones, dew-drop clear voice of Gian Slater virtuoso guitarist Slava Grigoryan and shakuhachi master Riley Lee. Says Manins: “Gould and I work with our collaborators in choosing pieces which can be vehicles for our spontaneity and creativity as individual musicians and as an ensemble.”

The album also features arrangements of large scale works by Ross Edwards (Dawn Mantras) and Michael Atherton (Shall we Dream?) by Manins who says: “I think these pieces work suprisingly well with only three or four players.”

Such A Sky follows Manins&Gould’s two previous and much acclaimed collaborations with Jones: 'Under the Tall Trees' (ABC, 2008) and 'The Cello and the Mockingbird' (Move Records 2011).

“Recorded live at Melbourne Recital Centre's intimate performance space the Salon, this inventive program of compositions, elaborations, improvisations and collaborations seems purpose-built for late-night listening of the more sophisticated variety. Built around pianist Tony Gould and cellist Imogen Manins' musical meanderings (in a good way) and conversations, Such a Sky explores written and improvised reposes to various composers' works in different styles and through varying textures, the latter lent more variety by the duo's fellow performers. Thus vocalist Gian Slater lends a lissome, spectral quality to the folklike title track, in which Manins takes off from the song Who Will Buy? from Lionel Bart's Oliver!; this same disembodied quality is also present as Slater's looped voice is used as a drone in an effective arrangement of Michael Atherton's Shall we Dream?, originally for children's choir. In Gould's appropriately bluesy setting of WH Auden's Funeral Blues Slater is more visceral and affecting. Slava Grigoryan's guitar brings welcome colour and texture to Manins and Gould's freely expressive playing in three works, thwo of which - Claus Ogerman's Valse and Gould's Johann & Igor - are based on the music of JS Bach (the other is Jobim's song, Luiza). Colour and teture, but also a pleasurable weightlessness are also evident in Ross Edwards' Dawn Mantras, thanks to the mesmerising contributions of shakuhachi player Riley Lee and percussionist David Jones. Both players join Gould and Manins in haunting versions of Ludovico Einaudi's Canzone Popolare and Paul McCandless's Queen of Sydney, with the recording comes to a tempered close - but not before we hear alternative versions of both pieces, this time with percussionist Eugene Ughetti.” ★★★★

“Imogen Manins and Tony Gould are Melbourne-based performers who have assembled this album from recordings made from a series of concerts they gave in 2012. Two of the tracks are credited to Gould as a composer, but the remainder of the selection is drawn from classical and popular repertoire...Manins and Gould play on all the tracks and the arrangements also involve other excellent performers, one or two per track. These include luminaries such as guitarist Slava Grigoryan, percussionist David Jones and shakuhachi master Riley Lee. Although the album has primarily an instrumental approach, several of the tracks employ the distinctive wispy voice of Gian Slater, combining improvised vocalise and song interpretations. The centrepiece of her contribution is Tony Gould’s moving setting of Auden’s Funeral Blues, a lyric previously set by Benjamin Britten and Ned Rorem, amongst others. Stater also gives a haunting rendition of Michael Atherton’s beautifully simple song Shall We Dream.

From the credits and the liner annotations of this CD it is clear that a major focus of this project is Manins’ work as an arranger. Ambitiously she has created an effective version for a quartet of shakuhachi, piano, cello and percussion of Ross Edwards’ new millennium piece, Dawn Mantras, although replacing the children’s choir part with block piano chords is not ideal. More creatively she has on Such a Sky produced an inventive arrangement around Lionel Bart’s Who Will Buy. Her creative contribution to other tracks where no arranging credits are given is also evident from her strong cello solos.

On the basis of what one hears here, Manins as a performer-turned-arranger should in future be considering putting her hand up as a composer, following in the footsteps of her distinguished collaborator, Tony Gould.”

Such a sky is available as as CD. It can be purchased online through Buywell Music or the Australian Music Centre which both offer secure online ordering.